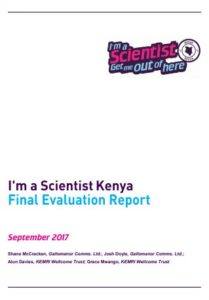 In 2014 Wellcome funded Gallomanor and the KEMRI-Wellcome Trust Research Programme to pilot and roll out I’m a Scientist, Get me out of here in Kenya.

This report summarises the work done and the impact on students, teachers and scientists. The intended audience is Wellcome, the Kenyan Ministry of Education, Science and Technology, County Directors of Education and potential partners in other countries looking to develop digital science engagement programmes.

The project has been a success:

The success of the project however, did not come without challenges:

Posted on October 22, 2018 by modjosh in Evaluation. Leave a comment