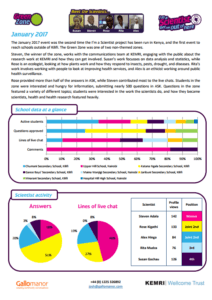 The January 2017 event was the second time the I’m a Scientist project has been run in Kenya, and the first event to reach schools outside of Kilifi. The Green Zone was one of two non-themed zones.

This Zone report contains more detail on who did what and what questions were asked.

We ran three zones in January 2017: The Blue Zone, the Green Zone, and the Health Zone. Read all of the January 2017 zone reports here.

Posted on July 19, 2017 by modjosh in Evaluation. Leave a comment