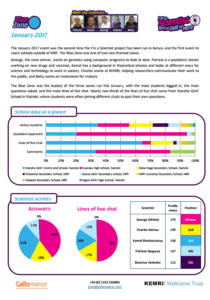 The January 2017 event was the second time the I’m a Scientist project has been run in Kenya, and the first event to reach schools outside of Kilifi. The Blue Zone was one of two non-themed zones.

The Blue Zone was the busiest of the three zones run this January, with the most students logged in, the most questions asked, and the most lines of live chat. Nearly two-thirds of the lines of live chat came from Starehe Girls’ School in Nairobi; where students were often joining different chats to post their own questions.

This Zone report contains more detail on who did what and what questions were asked.

We ran three zones in January 2017: The Blue Zone, the Green Zone, and the Health Zone. Read all of the January 2017 zone reports here.

Posted on July 19, 2017 by modjosh in Evaluation. Leave a comment